‘An eagle landing on a tree’; ‘a helicopter’; ‘a bird with heavy wings trying to take off’; ‘Jesus on the cross’. 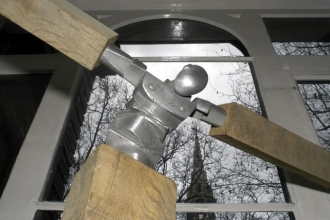 Perceptions of Jonathan Clarke’s six-foot tall sculpture, ‘The Eighth Hour’, vary with distance and personal perspective. Last week, students at the Gryphon School in Sherborne, Dorset, and at St Edward’s School in Poole, came up with fascinating observations. Today, Good Friday, it stands for three hours in Salisbury Cathedral, under the piercing spire at the crossing of nave and transepts.

The body of Jesus is of aluminium. The base, like an upright railway sleeper, is of rough oak and the wooden arms of the cross are his own arms. He is not so much on the cross as in the cross. It seems to be taking over him and be part of him.

Jonathan, based near Bury St Edmunds, carves in polystyrene, moving a block around an electric hot wire. He then buries it in Warwickshire sand and pours in molten aluminium. The mould is lost, destroyed and vaporized: a unique new body emerges, stronger than the first.

The act of creation involves shaping, death and resurrection. The act of pondering leads into surprise and intriguing insights. Miriam, my daughter, noticed a skull shape skewed in the body of Christ: we remembered the hill of Golgotha, ‘the place of the skull’. The edges of the arms are twisted three ways: upwards from the horizontal; backwards from the front; and out of line with each other, somewhat similar to a Rubik’s cube. Tension is embedded.

This is a muscular Christ who is actively taking on evil and fighting it. At the same time he is absorbing the sin of the world in his body, taking it out of circulation. Some see the cross overcoming, encroaching and constricting him. Others see his arms pushing away, outwards, vehemently. Maybe there is hint of Samson here, who brought down the pillars of the Philistine temple? In Judges 16:28-31, we learn that Samson killed more people in his death than during his life (verse 30). In contrast, the extraordinary news of Good Friday is that Jesus saved more people in his death than in his earthly life.

A few years ago, a man asked me why we had a close-up photo of helicopter wings in our church porch in Islington. I asked him to look again. He was deeply moved on seeing it afresh and said, ‘I used to be a helicopter pilot. Do you know what we call the pin that holds the blades on to the main body of the helicopter? If that fails, it crashes.’ I said I didn’t know. He replied, ‘It’s called the Jesus pin’ – because this was the cry of despair that went up if it all fell apart. We went inside the church and looked together at Paul’s letter to the Colossians 1:17, ‘in Christ all things hold together’.

As people meditate on the sculpture in Salisbury Cathedral today, it may be that as well as seeing what Christ did objectively for us, on our behalf and instead of us, we also identify with Christ subjectively, being part of him. At the end of the three hours, the top part of the sculpture will be removed and buried under the altar. We will be burying not only Christ, but also our sins and ourselves in Christ.