(The Video may be viewed here)

I love the story of a young mum on Shrove Tuesday, with her two sons, John and Mark, who were about seven and five. She was cooking pancakes and was trying to settle a squabble.

John was saying, ‘I want the first pancake’.

Mark would say, ‘No, I want the first pancake’.

In the end, their mum asked surprisingly, ‘Now, what would Jesus do?’

She went on, ‘Jesus may well have said “You have the first pancake.”’

That was really cunning. In Lent we often remember temptations to put ourselves before others and also to do it cunningly.

In reflecting on our Gospel and Epistle today, we are going to be looking at ‘Temptation’ and then at ‘Faith’.

It is set in Caesarea Philippi and Peter has just confessed that Jesus is the Messiah. As soon as he does that, Jesus says, ‘Don't tell anyone’ and then he talks about the suffering the Son of Man (he himself) is going to undergo.

Peter rebukes him and Jesus rebukes Peter. Listen to it again. There is a double rebuke. Verse 32:

Jesus said all this quite openly and Peter took him aside and began to rebuke him. But turning and looking at his disciples, he rebuked Peter and said, ‘Get behind me, Satan. You are setting your mind not on divine things but on human things.’

In other words, ‘You are thinking the way people think, not the way God thinks.’

So, why was Jesus so tough on his best friend? Well, I think it was because he was really, really, tempted.

In Lent, we often think of the three temptations of Jesus in the wilderness: turning stones into bread; the devil showing him the tower on the top of the temple and encouraging him to jump down - he said, ‘No’; the devil trying to get Jesus to worship him, to be given all the nations – again, Jesus said, ‘No’.

But there were three particular periods in Jesus’ ministry when he was sorely tempted. That was the first one, in the wilderness. The second was this one, at Caesarea Philippi, where Jesus was tempted, through his best friend, to protect himself. The third one was in the Garden of Gethsemane.

In this passage, Jesus sees Satan behind the words of Peter. So, how did Peter feel? He must have been absolutely devastated. Jesus then goes on with more teaching about the cost of discipleship. Now, Jesus makes it clear, and so does Paul in the Epistle, that the kingdom of God is completely free - it is a free gift of grace. But we also see, in these verses, that it costs us ‘not less than everything’.[1] It costs Jesus ‘not less than everything’ - suffering on the cross - but also, when we follow him, we give all that we have - absolutely everything that we have - to Christ, as we follow him.

Now, how does Jesus restore Peter? It is very interesting. I only noticed this in preparing for this sermon. It is the very next chapter, in Mark chapter nine: the Transfiguration. Immediately after this really tough rebuke to Peter, Jesus takes Peter, James and John up the mountain and is transfigured before them. So, there is suffering and glory, which go together like Good Friday and Easter Day.

The second restoration is after Caesarea Philippi, at the Mount of Transfiguration, and the third one we know very well. After Peter's denial of Jesus three times, in context of the trial, and after another miraculous catch of fish, in John chapter 21, Jesus restores him three times: ‘Do you love me? Feed my sheep.’

So, we now turn to the Epistle, Romans chapter 4. Paul recalls the story of Abraham and Sarah and the miraculous promise of a son, Isaac (Genesis 18). This is the story of the painting behind me. It was painted by Silvia Dimitrova, who is a Bulgarian artist based in Bath. Ali and I have worked with her over 17 years on seven paintings of ‘Women in the Bible’ and this is the first in that particular series.[2] 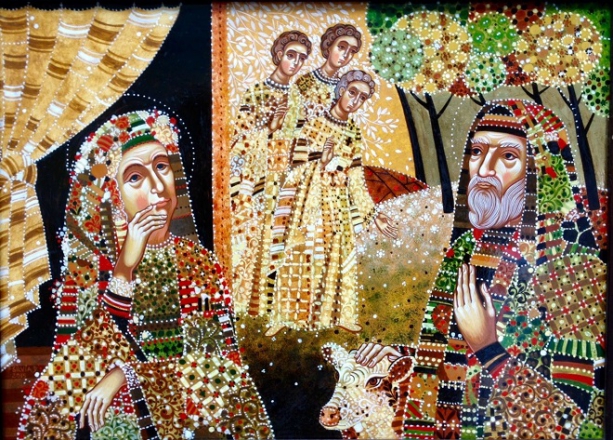 Listen to what Paul says again in Romans chapter four. Throughout Romans, Paul is always thinking of Jewish Christians and Gentile Christians being one in Christ. That is why ‘justification by faith’ is so important. It includes the Gentiles, who do not have the Jewish Law, as well as the Jews.

Abraham did not weaken in faith when he considered his own body which was already as good as dead (for he was about 100 years old) or when he considered the barrenness of Sarah's womb. No distrust made him waiver concerning the promise of God, but he grew strong in his faith as he gave glory to God. (Romans 4:19-20)

Now, normally we focus on Abraham but this painting also focuses on Sarah. When I think of Sarah I think of two particular women of faith, who were about at the age of Sarah. Firstly, my mother, Kathleen, who died in 2019. This photograph, taken a few years earlier, is the basis of the portrait of Sarah in the painting. Can you see Silvia has just flipped it the other way around?

The second person I think of when I remember a woman of faith, who is full of years, is Mama Gacoki. This is a photograph I took of Mama Gacoki in 2019. She was a really good friend in Kenya. Her son, Gacoki, worked with us in our house and garden for seven years, when we were in Kenya. She has an extraordinary faith in Christ. This is a video of her in her kitchen taken on the same day in 2019. She is putting on a scarf that Ali had given me to take to her. Her son is also in the video.

So, there you see Gacoki’s mother, who is now about 94. She is still a farmer and still cooks for herself. In the second video, Ali walks with her from her shamba into her son's shamba. That was taken in 2018, soon after Miriam, our daughter, and Munene, had the blessing of their wedding in Kenya.

I'm now going to ask Ali to read my poem, ‘Sarah’,[3] which expounds this painting and the story of Sarah and Abraham:

Who is this woman,

Who is this man,

Who are these visitors,

Oaks of Mamre and

Who ceased to be

After manner of women,

Then covers it up,

As good as dead,

Suggesting a son of

So, in our Second Sunday in Lent we have been thinking about Temptation and Faith. If you are going through temptation, remember that Jesus restored Peter three times and remember the faith that you can see in the face of Sarah and of Mama Gacoki.

In the name of the Father and of the Son and of the Holy Spirit. Amen.

[1] ‘A condition of complete simplicity
(Costing not less than everything)’